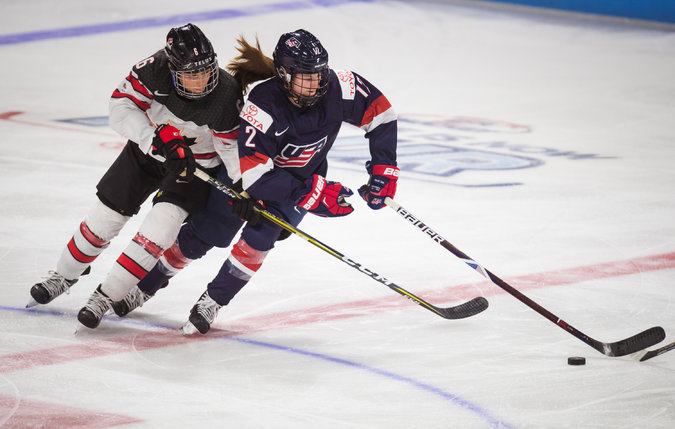 The move may just be insurance for the coming Four Nations Cup, which begins Tuesday outside Tampa, Fla., and is the last major women’s hockey tournament before the 2018 Winter Olympics.

Or inserting Barnes, a prodigious defender who has won three consecutive under-18 world championships, into the lineup could be a shrewd psychological and tactical ploy.

After all, Barnes is one of the few players on the American team who is somewhat unknown to Canada.

Her addition is one example of the chess-like maneuvering within the most intense rivalry in women’s hockey. By mid-December, the two teams will have played up to eight games against each other — including one on Wednesday — in the span of two months, plotting their final moves of a four-year buildup to an expected meeting in the gold medal game in Gangneung, South Korea, on Feb. 22.

“I use the analogy of going into it like a test,” forward Sarah Nurse of Canada said. “The better prepared you are when it comes down to that time in February when we play these guys again, we want to know what they’re going to throw at us. We don’t want any surprises. We want to be 100 percent prepared.”

The fact that no other national teams have consistently reached the North Americans’ level of excellence has created an unusual situation in which the United States and Canada always have an eye toward one-upping each other.

The Americans have not won an Olympic gold medal since 1998, further motivating them to find an edge. Forward Hilary Knight, who took home silver medals in 2010 and 2014, has said that since those crushing losses, she wakes up every morning thinking about revenge against Canada.

Both sides expect their opponents to have an encyclopedic knowledge of their tendencies come the Olympics. In 2014, Canada won, 3-2, in overtime of what many consider to be the greatest women’s hockey game ever played.

With little discrepancy in talent between the teams, the Americans are not so much seeking to find some undiscovered weakness in Canada’s armor during the Pre-Olympic series, but rather to prove that they can dictate the pace of play. They also must hone their chemistry and accountability to carry them through the tense sequences that will most likely decide another gold medal match.

“I remember in 2010, always trying to play catch-up,” Knight said. “In 2014, we were the better team and then we had sort of mental lapses. What’s different now than in years past, this team really looks internally for motivation.”

Since Canada’s Marie-Philip Poulin scored the golden goal in Sochi four years ago, fans have eagerly awaited a rematch of a game that drew almost five million viewers on NBC.

In North America, the audience for women’s hockey has grown with the creation of the National Women’s Hockey League in 2015 and the expansion of the Canadian Women’s Hockey League. Last March, the American players garnered national news media attention when they won a battle for equitable support from USA Hockey, their governing body.

With a greater platform, the American team changed their Pre-Olympic plans, focusing only on exhibitions with Canada. In past cycles, the national team also played college squads. But not only does Canada provide the best competition, it is also the top box-office draw.

The game here on Oct. 25 was sold out, with an announced crowd of 6,298 at Boston University’s Agganis Arena. Up to five of the remaining games between the rivals will be played in N.H.L. arenas.

“From a competition standpoint, I’d rather play Canada every single night, maybe Finland,” Knight said. “But when all is said and done and we’re looking from a women’s hockey exposure standpoint, we should be playing other teams. But I think that’s a little bit later down on in the future.”

She added that she would like to see stronger initiatives from the International Ice Hockey Federation to develop women’s hockey in more countries.

For now, even when they aren’t playing Canada, the Americans try to create the best facsimile, scrimmaging against college-age men’s teams in Tampa, where the national team has been based since September. It is a tactic used by the Canadians since 2002; this year, they will play about three games per week against 18-and-under teams in Alberta.

Jocelyne Larocque, a 2014 gold medalist, said those events had also helped grow women’s hockey throughout the province, as the games fill smaller rinks with hundreds of fans.

The American forward Jocelyne Lamoureux-Davidson said playing against men’s teams had been beneficial because the scrimmages replicate Canada’s speed and strength. But they leave something to be desired in terms of gravitas.

“It’s good to get that competition,” Lamoureux-Davidson said, “but it’s not the same playing them.”

For the United States women’s hockey team, “them” can only mean one thing.