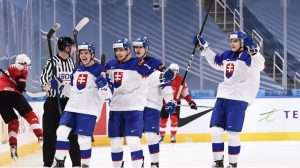 Slovakia celebrates its goal late in the third, the only goal of the game in a 1-0 win over Switzerland

Goals were hard to come by in the opening game of the 2021 World Junior Championship in Edmonton, but in the end Slovakia managed to break a scoreless tie late in the third period to give it a narrow 1-0 victory over the Swiss on Christmas Day.

The lone goal came at 14:17 of the final period when Roman Faith smacked home a loose puck from the slot, beating Thibault Fatton for the victory. Fatton had made a save off a bad-angle shot from Simon Nemec, but he pushed the puck right to Faith in the process.

Slovak goalie Simon Latkoczy ensured the win soon after on a Swiss power play, making a sensational glove save to the back side off a shot by Inaki Baragano, who couldn’t believe the puck didn’t go in. The Slovaks then killed off another power play at the end, diving and blocking shots with abandon. Latkoczy stopped 28 shots for the shutout, while his counterpart, Thibault Fatton stopped all but one of the 32 he faced in his Swiss-team debut.

“I found out yesterday that I would play,” Latkoczy revealed. “It was a pretty tough game. There was that glove save [in the third period] that helped me a lot, but my teammates also blocked a lot of shots for me, so I’m happy for how we played as a team.”

“We took too many penalties in the first period,” lamented Swiss coach Marco Bayer. “We had no flow, no rhythm. We had some chances later in the game, but we have to score. We have to be better in front of their net, play tougher.”

Although no team will be demoted this year, the win goes a long way to helping Slovakia qualify for the quarter-finals on January 2. Both Group A teams now have a day off before retuning to play on 27 December, the Swiss facing Finland in the early game that day and the Slovaks taking on Canada right after.

Christmas is a day for surprises, but Slovak fans were caught off guard when Latkoczy was in the blue ice to start the game. He had no previous IIHF experience with his country while Samuel Hlavaj had been considered the number-one man thanks to having previously played at two U18 and two U20 tournaments.

Latkoczy, however, was stellar in his debut. He was fortunate early on when Raymond Fust blasted a shot off the post in the first, but moments later he stoned Attilio Biasca from the slot.

Slovakia had an impressive opening period. It produced the only three power plays, but despite some good puck movement and possession in the Swiss end the team couldn’t get the game’s first goal.

In the second the Swiss got their skates moving and were the better team, but Latkoczy was rock solid. He made a nice save off Lorenzo Canonica but saved his best for last, robbing captain Simon Knak from in close in the dying seconds to keep the game scoreless after 40 minutes. Knak led all players with eight shots of his team’s 28.

The Slovaks misfired on several good chances of their own, but given their role as underdogs they deserved credit for their play, especially team defence.

Both teams were tentative in the third, and a scoreless tie through 60 minutes seemed imminent–until Faith pounced on that loose puck.

“We had a few chances during the game, but we were waiting for the bigger chances and playing good defence mostly,” Faith noted. “When I came on to the ice for that shift, I skated hard to the net hoping for the rebound, and it came to me.”