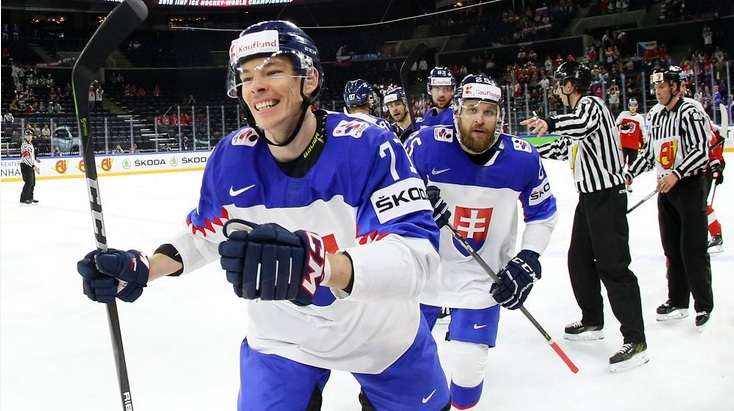 The 2019 IIHF Ice Hockey World Championship was bittersweet for the Slovaks. They played on their home ice in Kosice – the hometown for several of the players. It was the swan song of Ladislav Nagy’s career. They opened with a win over the USA but their tournament got derailed by a couple of late collapses against Canada and Germany that cost them points that would have put them in the quarter-finals.

Fast forward a couple of years and some things have changed. Seven players are returning, as is most of the coaching staff, but with a big restriction on the number of NHL players available, some players will be expected to take on more prominent roles and other spots for young players will open up. Will that allow Slovakia to reach the quarter-finals for the first time since 2013?

Julius Hudacek has been on the Slovak roster for six previous World Championships and been the starter twice, so it would seem to be his crease to lose. The 32-year-old puckstopper has played the last four seasons in the KHL, the last three for Spartak Moscow, and selected to three all-star games. Back in 2014/15, he was the top goaltender and MVP of the SHL while playing for Orebo HK.

Behind him, Branislav Konrad is the veteran. Now 33, he has been a mainstay in net for HC Olomouc in the Czech Extraliga for the past six seasons. He played two games at the 2016 World Championship and two more at the 2018 Winter Olympics. If the Slovaks choose to go the younger route, 24-year-old Adam Huska appears ready. He has been based in the United States since he was 17, first in the USHL, then the NCAA, and now for the AHL’s Harftord Wolfpack in the New York Rangers system.

The Slovak team does have a pair of experienced defencemen, namely Marek Daloga and Adam Janosik, who both currently play in the Czech Extraliga. Daloga is a 32-year-old journeyman defenceman who next season will suit up for Kometa Brno, his ninth team (in four different leagues) in seven years. He has played in five previous World Championships and also the 2018 Winter Olympics. This will be Janosik’s fourth World Championship.

The only other two internationally-tested d-men are Martin Gernat and Mario Grman, but it’s been a few years for both. Gernat’s previous appearance was back in 2017, but he’s coming off a big season where he helped Ocelari Trinec repeat as Czech champions and led Extraliga defencemen in scoring with 41 points in 50 games, so he might help the Slovak offence from the back end. Grman’s previous appearance was in 2018 when he was only 20; he’s played the last two seasons in Finland for SaiPa Lappeenranta.

Rounding out the presumptive top six are Daniel Gachulinec and Mislav Rosandic, but there are four youngsters that will also vie for ice time: 21-year-olds Martin Bucko and Michal Ivan, 18-year-old Samuel Knazko, who plays in the Finnish junior league, and talented 17-year-old Simon Nemec, who registered four assists in five games at this year’s World Juniors and is used to being the youngest player on his team.

Slovakia’s group of forwards is not as top-heavy in experience as the defence. Leading the way are a pair who play in the Finnish Liiga: giant 25-year-old Pavol Skalicky from champion Lukko Rauma, who was a depth player in three previous World Championships but will be expected to take a more prominent role this time, and diminutive 27-year-old Michal Kristian of Karpat Oulu, who’s played in two Worlds and an Olympics. The oldest player on the roster is 34-year-old David Buc, who is a bit of a late bloomer in that he didn’t play in his first World Championship until he was 31.

The only NHLer on the Slovak roster is 22-year-old right winger Marian Studenic, who played eight games with the New Jersey Devils along with 22 for the AHL’s Binghamton Devils. From the AHL is 25-year-old Robert Lantosi of the Providence Bruins, and from the KHL is 21-year-old Adam Liska of Severstal Cherepovets, who performed well for the Slovaks at the U18 and U20 elite levels. Other notable names are 25-year-olds Peter Cehlarik, Kristian Pospisil and Matus Sukel, while other young players include 21-year-old Milos Roman and 20-year-old Martin Fasko-Rudas, who both had solid junior careers in recent memory.

This will be the third World Championship and fourth major tournament – including the 2018 Winter Olympics – with Craig Ramsay at the helm. In each of the two previous tournaments, the Slovaks barely missed the quarter-finals, with the home tournament two years ago being particularly disappointing. But Ramsay has a much different team to work with this time and the make-up of a lot of the other teams is also different, so what matters is that he can get this mixture of veterans and youngsters to all work as a cohesive unit. Assistants Michal Handzus and Andrej Podkonicky were on the staff in 2019, while Jan Pardavy is new, but all are experienced players internationally.

Prior to joining Hockey Slovakia in 2017, Ramsay was a long-time NHL coach – mostly an assistant – with several teams, briefly heading the Buffalo Sabres, Philadelphia Flyers and Atlanta Thrashers. He previously played 14 seasons with the Sabres.

As mentioned, Slovakia has suffered heartbreak in the past two tournaments, just missing out on the quarter-finals, and the path this year isn’t easy. The Slovaks are certainly in a tough group with Sweden, Russia, the Czech Republic and Switzerland, so if they’re going to make it into the top four, they’ll have to knock one of those teams out – most likely one of the latter two. The game against the Czechs – always one with a lot of emotion – is the last of the group stage for both teams, so we’ll see if it has extra meaning. But first things first… they open up with games against Belarus and Great Britain, so they want to make sure they don’t leave any points from those games on the table before the schedule gets more difficult.