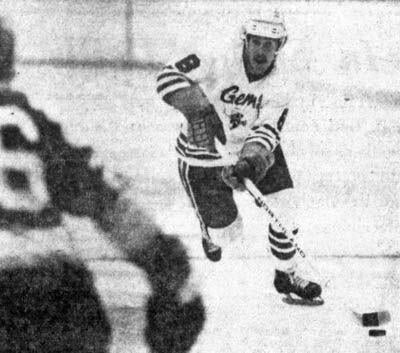 Dayton Gems forward Rick Bragnalo moves in to score the game-winner with 40 seconds left in the second overtime as part of a 3-2 victory over the Des Moines Capitols in International Hockey League playoff action on April 2, 1975.

By Tom Annelin – The Chronicle Journal

Back in the days of the Thunder Bay Junior Hockey League, the Fort William Canadiens were a team that continually produced a plethora of on-ice talent.

One such player on the local squad was a diminutive, yet tenacious and highly-skilled forward, Rick Bragnalo.

Bragnalo produced at well over a point-per-game with Fort William with 105 points in 59 outings in his time there. He was even picked up by the Westfort Hurricanes after they won the TBJHL title in 1970 and went on the Memorial Cup trail.

Bragnalo registered 12 points in as many outings for the Herks, who eventually fell in the western Canadian final to the Weyburn Red Wings in six games.

Recognized for his skill and his intensity, Bragnalo went on to earn a NCAA Division I scholarship to the University of Denver, playing alongside fellow local products and future NHLers, Mike Busniuk and Vic Venasky.

In 1974, Bragnalo started his pro career by signing with the International Hockey League’s Dayton Gems.

That initial campaign in the IHL saw him light it up offensively, finishing with a league-best 113 points on 41 goals and 72 assists.

Of note, another alumnus of the Fort William Canadiens, who was a stellar performer in the IHL in the 1960s and early 70s was Kenora product Bryan McLay.

That crafty forward spent four seasons with the local Habs from 1953-57 prior to shining with the Muskegon IHL franchise where he was a star, and was the fifth-highest point producer in league history with 1,100 points to his credit.

The following season in which Daytona went on to win the Turner Cup, Bragnalo was well on his way to another solid run, despite an upper-body injury that sidelined him for a month.

However, his play had already caught the eye of the NHL’s Washington Capitals, whose new bench boss, Tom McVie, was his coach with the Gems.

Bragnalo went on to make his NHL debut with the Caps on Feb. 22, 1976 against the New York Islanders, then collected his first point, with an assist two nights later versus the Philadelphia Flyers.

Bragnalo would then notch his first NHL goal on March 16 of that year in a 5-2 home ice victory over the New York Rangers.

Going on to play four seasons with the Capitals, Bragnalo supplied 50 points on 15 tallies and 35 assists.

Bragnalo made a few stops later on with the Hershey Bears of the AHL and an 83-point run, in 67 games played, with the Port Huron Flags (IHL) in 1979-80. Bragnalo next played internationally, where he spent the following 12 seasons.

Competing in Italy with such clubs as Brunico/Bruneck and Milan, his heritage also gave him the chance to play for the Italian national team, where he finished third highest among that country’s point producers with 50 in 145 outings.

Included in those contributions was a one-goal, two-assist effort in a 3-3 tie against Canada at the 1982 world hockey championship in Finland.

Bragnalo went on to post 1,292 points throughout his time on the ice in 1,074 games played.

He later went into coaching and guided the Thunder Bay Kings to back-to-back Air Canada Cup national under-18 championship medal finishes, mining silver in 1996 and bringing home gold in 1997.

Inducted into the Northwestern Ontario Sports Hall of Fame in 2011 in recognition for his distinguished career achievements, Rick Bragnalo certainly earned his place on the honour roll of the Lakehead’s best.